The Time To Push Back Is Now

Every aspect of life is subject to change, and so too are human societies. Generations to come will either embrace or reject the norms, values, and truths set forth by their predecessors. This is how we were able to alter some antiquated practises and customs that were deemed barbaric. However, we must recognise that some truths, ideals, and core principles are unchanging and should remain so, as they are fundamental structures of our consciences and have developed with us through generations to the point where they are irrevocable, unquestionable, and reliable for the maintenance of sanity and order in society.

It is critical that we do not relinquish our positions as guardians of certain customs and traditions, nor do we give an inch to people with ideas that threaten to tear society and the relative sanity we enjoy. In recent years, there has been a concerted effort to redefine terms and rewrite history. The main problem here is that we were slow to recognise it. These changes were imposed by the largest corporations and institutions, aided by the most vocal and intolerant members of society. So-called Ivy League schools have become propaganda machines, where core skills and knowledge are sacrificed for the thrill of brainwashing these highly impressionable young adults into indoctrinated apostles and evangelists of the Almighty Wokeness, who then go back into their communities and push lies, falsehoods, and unrealistic ideas.

Don’t you dare call them out or try to debate them or risk being labelled a terrorist pushing for violence. In fact, they will not debate, because their positions are easily exposed for the nothing-burgers they are. Loud on the outside, hollow on the inside, like empty barrels. What’s really troubling about this obvious development is that institutions that were once held up as being reputable and reliable are the ones leading the charge. Public figures, celebrities, and academics once thought to be “reasonable” have become the ones driving cultural decline by enforcing changes that few in society want.

For anyone who has paid attention, there is a game here: a very tiny group of people are propped up, and their experiences are linked to social injustice, and to support them we have to make certain laws, enact certain policies, give up certain rights and liberties for their comforts, else we are the enemy of society. Because, if we were not the enemies of society, we would have acted compassionately, where compassionately means to vacate core principles and convictions. And as a result of this blatant and grave defiance, we should be blocked from social media, lose our sources of income, or our liberties and lives.

It is getting harder to ignore how much self-censorship we engage in because we have to suppress the truths of everything we inherently hold to be true. Allowing a small minority of society—whether individuals or institutions—to dictate how we interact with one another and how we think is unnatural, unhuman, and indicative of fascist and tyrannical tendencies. If the media sides with a particular opinion, we are now required to echo that opinion. Never before in human history have the media been so powerful or demanded that you accept everything they feed you without question. They’ve taken on the role of judge, jury and executioner, and we’ve had to cower in fear that if they were to publish something about us, no matter how untrue, we might lose everything in a society that has adopted the Us versus Them mentality.

It is perplexing that countries that were once held up as models of democracy and individual rights and liberties are now experiencing rapid declines in these areas, but it serves to remind us that principles are only as strong as the societies that choose to uphold them. Many people are so caught up in their imaginations that they have no regard for common sense or the reality that is right in front of them. Every mental disorder is now an identity, and these identities are frequently paraded and advertised on social media. It’s no surprise that an increasing number of people are experiencing self-disillusionment and internal chaos. Instead of assisting these people, we are reinforcing their false beliefs about themselves and the society around them. When prepubescent children express childlike admiration for certain stereotypical traits in the opposite gender and their parents are willing to support them in undergoing life-changing surgeries to become the opposite gender, it reveals the impending psychosocial challenges of this and future generations.

Children who look to us for guidance and direction are having their lives ruined by their custodians because it has been decided that every desire must be pursued and attained. If society were true and fair, and cared about science and people, the stories of detransitioners, all of whom express guilt and shame and blame misdirection on their parents, guardians, and all health practitioners who should have known better, would be mainstream. People who have been maimed, had their lives destroyed, or died as a result of vaccines marketed as safe and effective are completely ignored by news outlets and other corporations. Members of the healthcare community who chose to question the veracity of the virus and vaccine information based on evidence-based facts have been demonised, with some losing their jobs.

Trust the Science; that’s the current mantra. Ask no questions at all. Stay in line. Many have abandoned the core values that have advanced civilization to this point. We are evolving into a culture that prefers lies and fabricates narratives in order to serve personal and financial interests, regardless of how destructive they are, how many lives they destroy, or how severely they undermine the credibility of our institutions. We must accept the truth. Just the truth, not my truth or yours. It is not in anyone else’s best interest to make allowances for ideas or people who deny the obvious. We have a responsibility to future generations, to the health and happiness of our own children, and to our own sanity and security. 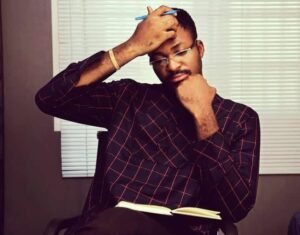 Samuel Ugoh is an author, ghostwriter and a social commentator, whose writings and observations push for the questioning of ideas and actions, with the hope of making society better through accountability and honesty.