How Black History Month Can Be Used To Reinforce Postmodern Fascism.

Black History Month is upon us. And like Pride Month, we can expect to see a lot of multinational companies virtue-signalling on social media about this event. Which bears the question, why is wokeism promoted by capitalist businesses when too often those behaviours end up in commercial failure – “go woke, go broke”

It should come as no surprise that that multinational corporations actively promote a variety of “moral” and “progressive” ideologies in an effort to project virtue. Despite the fact that, in most cases, these ideas are neither moral nor progressive, but rather stoke the raging fires of cultural instability and hasten the decline of an already ailing and fractured society, all in an effort to placate fringe groups that are motivated by politics and ideology.

While there is nothing inherently problematic about celebrating the histories of different communities or even the “identities” of other groups, the methods these corporations use for their campaigns are comparable to “green washing” techniques (the marketing tool used to persuade the population that their objectives and policies are environmentally friendly). The promotion of progressive values has shaped the reputations of businesses, demonstrating ethical behaviour publicly while the story behind closed doors may be different.

With “woke washing,” the most immoral corporations that engage in child labour, employee and social abuse, collective redundancy, and other irresponsible practices not only appear to be righteous, but also signal to their (potential) customers that they share similar moral values. But, do businesses really spend so much time and money promoting wokeism just to look good in the eyes of the public?

The ESG (Environmental, Social, and Corporate Governance) score comes into play, which is a framework that evaluates an organisation’s performance against various sustainability metrics (related to either environmental, social, or governance issues). Climate change, diversity, equity, and inclusion (DEI), and human rights are all examples of issues that are generally recognised as important across sectors, and are thus typically factored into ESG scores. The ESG score seeks to identify organisations that are aligned with their stakeholders and aware of issues that may have a negative impact on their reputation. If a company performs poorly in the rankings, it may be subject to negative press and public scrutiny.

Under the Social category, the promotion of the woke ideology is key to boost the overall ESG score. The final rating will determine if a business has the viability to be “investable”. Indeed, the ESG set of standards is employed by “socially conscious” investors to screen potential investments: The world’s leading providers of investment (BlackRock, Vanguard Group, UBS Group, Fidelity,) only invest in companies with a specific ESG rating.

Therefore, a poor ESG ranking would inevitably result in businesses losing out on investment opportunities, which is why it is not a matter to be taken lightly.

While Nike has a high ESG score, others, such as Tesla, have an unexpectedly low score, possibly due to the increasing number of Elon Musk’s “anti-woke” criticisms on Twitter. The ESG scores seem more determined by a fanciful worldview than on integrity, merit, or even consistency. They disregard the fact that the vast majority of consumers of these businesses or institutions have no desire to take part in these utopian schemes to reshape society, reclassify the things that are of fundamental importance to the vast majority of people worldwide, and punish individuals and organisations that disagree with their ideologies.

With these businesses and institutions serving as the compass for what their subjects should believe and how they should think, the mission is to have people go against their own realities and submit to the dictates of faceless bureaucrats.

And so, we can now appreciate how initiatives such as Pride Month or Black History Month offers the perfect opportunities for multinational companies to boost their ESG social score with excessive and costly woke marketing and virtue signalling campaigns.

In return, their good ESG grade will attract the biggest investors, thus increasing the lucrativeness of the business, the forecasts of the generated profit, which ultimately will make it easy to obtain bank loans.

In summary, establishing a woke philosophy may ensure development via investment and availability to financing while also generating a positive impression on the public and conveying an image of morality.

ESG’s additional absurdity is its authoritarian drive and vilification of dissident voices accused of racism, homophobia, sexism, and white supremacy (always without actual proof, of course). Therefore, by gatekeeping the economic success of corporations and people, they ensure that any critics of the system are quickly and easily singled out and frustrated to the point of falling in line or running off with their tails between their legs. The establishment has made certain that everyone fits the mould. Staying “woke” is based on fear, not on so-called “moral” or “progressive” ideas that are supposed to be based on the soundness of their ideas or ambitions.

So, as we watch the nauseating performative prancing around by multi-million or billion-dollar corporations this time, we should remember that these people and institutions are acting in fear. Not that they genuinely care about or love the groups they are advocating for. Their attention is on their pockets. In essence, it is imperative that we keep spreading awareness about those people, organisations, and ideologies that offer nothing but the actual lack of inclusiveness that they accuse others of, their steadfast commitment to excluding diverse viewpoints, and their appetite for fragmenting society with divisive tactics, false claims and alarmism. Our complete and collective submission is the end result. This can be avoided by continuing to push back against these regressive techniques. 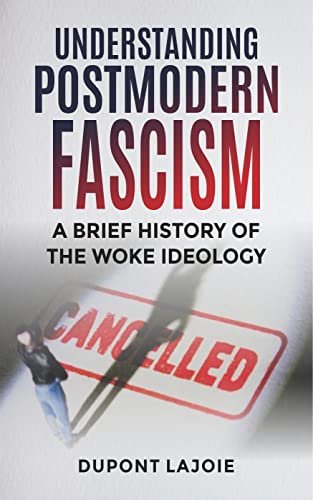 Dupont Lajoie is a French free thinker and indie author living in London. Currently in his early 40s, he chose his pen name in reference to the drama film directed by Yves Boisset in 1975, known in English as “The Common Man”, that depict a simplistic caricature of ordinary people, the “average Frenchman”: cowardly, racist, odious and murderous.

Dupont has strived to explain the roots of the demonisation of the indigenous working class in his first essay: “Understanding Postmodern Fascism: A brief history of the woke ideology.” The book is a polemical pamphlet recounting the rise of the modern left, the progressive libertarian ideology deriving from the cultural Marxism philosophy.